The new AG Pro-Quint will boost signals for customers with service on AT&T®, Verizon(TM) and T-Mobile(TM) 4G networks, and on all carriers' 3G and 2G networks. Benefits include fewer dropped connections and no-service "dead zones," faster data transfer rates and improved battery life for cellular devices.


"The AG Pro-Quint is the most technologically advanced signal booster Wilson has ever produced, with coverage enhancement for five frequency bands integrated in a single device," said Laine Matthews, Wilson business development director. "Despite this sophistication, it's by far the most compact, affordable and easiest-to-install booster in its class."

With an MSRP of $1,799.95, the AG Pro-Quint is the most affordable five-band booster available. Wilson's compact, integrated design is about the size of a small textbook and weighs less than 3 pounds.

Designed for professional installation to provide enhanced signal coverage in buildings up to 80,000 square feet, the Wilson AG Pro-Quint boosts signals on 800 MHz, 1900 MHz, AWS and both AT&T and Verizon 700 MHz LTE networks.

The AG Pro-Quint's LCD display and push button controls allow the installer to optimize the gain on each of the five frequency bands for the location where the booster is installed.

The AG Pro-Quint delivers up to 75 dB of gain and supports CDMA, GSM, LTE, HSPA+ and WCDMA technologies. It can be paired with a variety of Wilson inside and outside antennas to create a custom signal booster system. Like all Wilson signal boosters this unit features cell site protection technologies refined over more than a decade of research and development.

The AG Pro-Quint will be available in the third quarter of 2012 from wpsantennas.com. 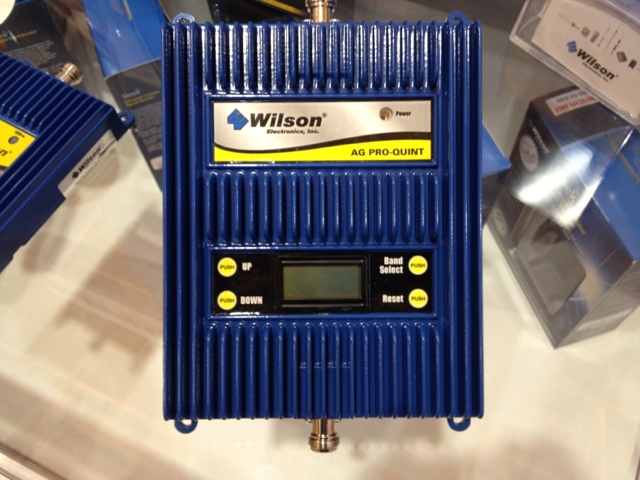